Map on Monday: NATIONS OF THE CAUCASUS

The Physical Ecology, Communal Loyalties, and Geopolitics of the Caucasus 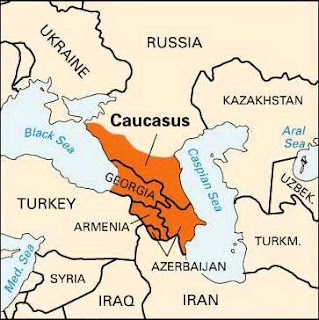 The region of the Caucasus is geographically treated as an isthmus, an extended land bridge between two bodies of water. The Caucasus region runs north and south bordered on the east by the Caspian Sea and on the west by the Black Sea. This earthquake-prone region is also found at the meeting point of tectonic plates: the Eurasian plate in the north and the Arabian plate in the south. The collision of these plates has created the geographic feature that gives the region its name: the Caucasus Mountains (which runs west to east from the Black Sea to the Caspian). Due to its presence along the Eurasian Plate, the Caucasus - not the Alps or the Pyrenees - is also the location of Europe's tallest mountain, Mt. Elbrus (rising 18,510 feet and located within Russia. The Russian-hosted Sochi Olympics was also held within the Russian Caucasus).

The Caucasus Mountains form two distinct chains, the Greater Caucasus (which form the border between Georgia and Russia) and the Lesser Caucasus (which stretches through Armenia and forms a border between Armenia and Azerbaijan). While this terrain leaves Armenia mountainous, it also gives Georgia and Azerbaijan some valleys and plains sandwiched between the Greater and Lesser Caucasus. The region is also sometimes described as the north Caucasus (or Ciscaucasus) and as the south Caucasus (or Transcaucasus - the area south of the Greater Caucasus). In the north are found areas of Caucasian Russia (e.g. Chechnya, Dagestan, and North Ossetia) while the south Caucasus includes the three nations of Georgia, Armenia, and Azerbaijan.

As a mountainous region, the Caucasus is also home to many important mineral resources such as alunite, gold, chromium, copper, iron ore, mercury, manganese, molybdenum, lead, tungsten, uranium, zinc, and coal. Although the region is considered rich in energy resources (i.e. natural gas and oil), these resources are largely limited to Azerbaijan on the southwestern Caspian coast. Armenia imports energy resources from Russia while Georgia is rich in hydroelectric power.

The region of the Caucasus has a total population of around 24 million people: 7 million living in the Russian north Caucasus and 17 living in the south. Of these 17 million, about 9.5 million live in Azerbaijan, 4.5 million in Georgia, and 3 million in Armenia. The Caucasus is also an ethnically diverse region, with over 50 different ethnic groups scattered throughout the divisive mountainous landscape. For simplicity, languages and ethnic groups of the Caucasus may be considered in three broad categories: the indigenous Caucasian peoples and languages (such as the Georgians, Avars, and Chechens), the Turkic-speaking peoples (like the Azeris and Turkmens), and the Indo-European speakers (including Armenians, Ossetians, Kurds, and Slav/Russians).

The Caucasus is also the meeting place of Islam and Christianity, with Christian Russia to the north and the Islamic Middle East to the south. Within the broader region, however, there is no clear north-south line between the two religious civilizations, as the northern Caucasus is populated by Muslims within the umbrella of Russia while two of the three nations in the southern Caucasus - Armenia and Georgia - are Christian. Armenia is considered the first to make Christianity the state religion in A.D. 301 (twelve years before it became legal in the Roman Empire through Constantine's Edict of Milan). Georgia to the north made Christianity the state religion in A.D. 337, the same year Constantine died. These two Christian nations, however, hold differing Christian churches; Georgian Orthodoxy forms the core of one nation while the Armenian Apostolic Church is the majority in the other. While the Georgian Orthodox Church is in communion with the broader Orthodox community, the Armenians are treated as "Oriental Christian" in that they reject the Christological formulations of the Council of Chalcedon (A.D. 451).

Christianity is not the only religion in the region to face intra-religious differences. Sunni and Shiite Muslims also comprise a significant presence in the Caucasus. Sunni Muslims make up the majority population in the north Caucasus while Shiite Muslims are dominant in Azerbaijan. Ethnicity also plays an important role in conjunction with religion. Azerbaijan, for example, may be a Shiite nation akin to Shiite Iran, but its Turkic backgrounds gives it close bonds with Turkey to the west and the other Turkic nations across the Caspian Sea. In the north, many of the Sunni Muslims of the northern Caucasus practiced a mystical form of Islam known as Sufism. Sufism is also open to inculturation to local custom and tradition. Imported to the region following the collapse of the Soviet Union, however, was Salafism (or Wahhabism), a virulent form of Islam that originated in the Arabian peninsula and supported today by the Saudis. Wahhabi extremism has overrun the region's Sufi nationalist movement and today is organized around the creation of a "Caucasian Emirate" which would span the northern Caucasus region. 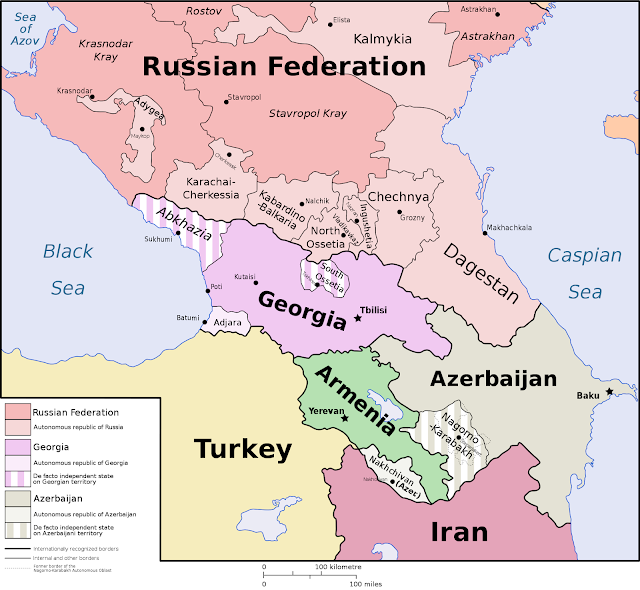 The geopolitical situation of the Caucasus is complicated, to say the least. Historically the entire region has experienced an ebb-and-flow of invaders from the north (Orthodox Russia) and the south (Islam). The small nations of the Caucasus tended to be unable to protect themselves from outside aggression. Sometimes these nations have formed alliances with a larger power, only to later stand alone during an invasion. Georgia, for example, entered into a defensive alliance with the Russian Empire against the Persians, but received no Russian aid when the Persians attacked. To Georgia's dismay, Russia soon simply annexed a weakened Georgia instead of supporting it as an independent nation with civic and religious roots much older than those in Moscow. The Soviets later pitted regional ethnic groups against each other and did what it could to weaken and suppress Christianity. Long histories like those of the Caucasus play a large role in the region's geopolitics today.

Georgia and Russia still experience poor relations. Several breakaway regions are supported by Russia while Georgia has sought to deepen its ties with the European Union. In August 2008, the first European war of the 21st century ensued between Russia and Georgia over the breakaway provinces of South Ossetia and Abkhazia. After recognizing them as independent of Georgia, Russia occupied both to ensure their autonomy from Tbilisi. Russian relations with Armenia, however, remain strong. Russia has played a significant role as protector of Christians in the Mideast - and the Christian Armenians have long looked to Russia as a protector. Armenia's border with Islamic Turkey, combined with the memory of the Armenian Genocide of 1.5 million Armenians at the hands of the Ottoman Turks, is reason enough for the small, landlocked nation to keep a strong relationship with its Slavic, Christian brother nation to the north.

Armenia and Azerbaijan, however, have had a history of confrontation. Following the fall of the Soviet Union and Armenian independence, Armenia sought to capture the Armenian-populated region of Azerbaijan's Nagorno-Karabakh (see map above). Although initial fighting stretches into the 80s, 1992-1994 saw much of the heavy military engagements which left over 30,000 dead. Although Russian diplomacy brought about a cease-fire in 1994, Azerbaijan, along with its ethnic and religious ally, Turkey, have had closed borders with Armenia ever since. Today, Armenia is dependent on maintaining good relations with Georgia and Iran for its trade. Tensions over Nagorno-Karabakh have increased in 2015, with the Armenian president calling the region "an inseparable part of Armenia" and violence spreading along the broader Armenian-Azerbaijani border.

For more information on Armenia, Azerbaijan, and Georgia, visit their pages on the CIA World Factbook.

The Anthropology of Accord has also written previous Map on Monday posts on neighboring Iran and Turkey along with a post on Turkic peoples (which includes the Azeris of Azerbaijan). See also AoA's book review of Armenian Golgotha.

Strafor has also released two short videos on the geopolitics of the Caucasus region and Russia's north Caucasus.

For more excellent maps of the region, visit this series of Caucasian maps. The map at the very top of this post was created by Daniel Feher and can be accessed by visiting this link. We welcome all our readers to visit Mr. Feher's website, Free World Maps.
Posted by Andrew Lynch at 6:00 AM