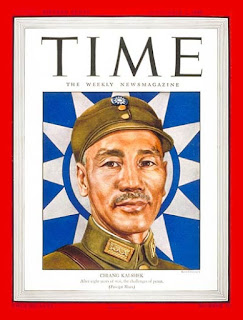 This is a 1945 magazine cover of Chiang. [Another portrait of him, during this same period, was the centerpiece of Tiananmen Square -- see bottom of post].

Four years later, after his nationalist army was defeated by the Communists, he led the Kuomintang government in exile in Taiwan until his death in 1975.

Take a look at a short newsreel.

President Roosevelt and his generals were often driven to complete distraction by the cantankerous Chinese leader. But in recent years, there have been big changes in how Chiang Kai-shek is viewed.

Here are excerpts from the 'Washington Post' review of Generalissimo by Jay Taylor:

Chiang Kai-shek ranks as one of the most despised leaders of the 20th century. Famously derided as "Peanut" and "General Cash-My-Check," the leader of China's Nationalist government bedeviled the Allied war effort in World War II with his lackluster defense of his country. His corrupt and brutal regime squandered billions of dollars in American aid and drove the Chinese into the arms of the communists. He died in exile a deluded despot, relegated to a footnote in modern Chinese history. Or so the conventional story goes.

Now, however, Jay Taylor's new biography, The Generalissimo: Chiang Kai-shek and the Struggle for Modern China, challenges the catechism on which generations of Americans have been weaned. Marshaling archival materials made newly available to researchers, including about four decades' worth of Chiang's daily diaries and documents from the Soviet era, it torpedoes many of that catechism's cherished tenets. This is an important, controversial book.

Taylor, who was a U.S. Foreign Service officer in Hong Kong during the Cultural Revolution, argues that, far from being incompetent, Chiang was a farsighted, disciplined and canny strategist who repeatedly predicted major geopolitical events and made the most of the weak hand he was usually dealt by allies and enemies. His five decades of participation, at the highest levels, in world-changing events may be unsurpassed in the 20th century. For all his flaws as a political leader, Chiang laid the foundation not only for Taiwan's prosperity, but also for its transformation into the only democracy in the Chinese-speaking world, and one of the few in Asia.

[The book] is especially timely appearing as it does during a period of flux and promise in the delicate dance between Taiwan and China. A new closeness is apparently taking hold: trade agreements are being signed, direct flights are being established and Chinese tourists are flocking to the island. There's even talk of a peace treaty. So the book naturally raises the question: Whose vision of China's future is really winning? Is it Chiang's dream of a more free-wheeling nation, or the image of a revolutionary utopia championed by his communist nemesis, Mao Zedong?

Taylor reveals intriguing details, such as Chiang's decades-long secret communications, after his 1949 defeat, with Mao's No. 2, Zhou Enlai. He describes Mao receiving instructions and trunks full of Mexican silver dollars from Soviet leader Joseph Stalin -- without which, Taylor argues, the fabled Long March probably would have been impossible. He debunks the view that Chiang's entire military record was one of abject failure and sheds fresh light on Chiang's ties to the United States during the Cold War conflicts in Korea and Vietnam. Chiang strenuously warned President Lyndon B. Johnson against being drawn into the latter war. And Taylor adds depth and detail to the saga of the 1970s U.S.-China détente and Washington's eventual recognition of Beijing, describing how Chiang concealed his bitter loathing of President Richard Nixon...

Born the son of a village salt merchant and raised by his widowed mother, Chiang Kai-shek rose to rule the world's most populous country. After revered revolutionary Sun Yat-sen died in 1925, Chiang seized power. In 1927, he launched a bloody purge of the Chinese Communist Party, which had been cooperating with Sun's Nationalist Party, touching off decades of civil conflict. Soon after, he married Sun's sister-in-law, Mayling Soong, the youngest daughter of a wealthy and powerful Shanghai family and a formidable figure in her own right.

In the 1930s, he tried to hold Japan's armies at bay while battling the communists -- until 1937, when full-scale war erupted with Japan, and he joined forces with Mao. After Pearl Harbor -- Chiang had long predicted that Japan would target the United States -- he joined the Allies. As World War II ended, he resumed fighting the communists. After his defeat, he retreated to the island of Taiwan, then called Formosa.

Over the next quarter-century in exile, Chiang ruled despotically while playing a key role as the United States' closest Cold War ally in the Pacific. His son, Chiang Ching-kuo (whom Taylor profiled in a well-regarded earlier book), succeeded him after his death in 1975. Since the late 1980s, Taiwan has metamorphosed into a prosperous, vibrant democracy.

Chiang has been widely dismissed as a brutal, corrupt and incompetent military dictator who cared nothing for ordinary Chinese, let others fight the Japanese in order to conserve his resources for battling the communists and contributed little of value to China, Taiwan or 20th-century history. The Generalissimo evidently believed that to answer such charges would be demeaning and futile...

Taylor's rehabilitation of Chiang's reputation mirrors a similar -- though unofficial -- phenomenon now underway in China, where the nationalist leader was long denounced as a "bandit" and a "running dog of the American imperialists." On the mainland, Chiang is now widely regarded as a Chinese patriot who made valuable contributions to the modern nation. Moreover, although they may not care to admit it, the leaders in Beijing have looked to Taiwan as a model for what a prosperous and free Chinese society might be like. And as China sheds its Maoist legacy, rendering the Chairman's rule a three-decade aberration, even mainstream Chinese scholars are suggesting that the country might have been better off had Chiang triumphed in 1949.

Perhaps Chiang has emerged victorious after all. For surely today's China resembles his vision more closely than it does Mao's.

From a more recent analysis in 'Foreign Policy' magazine:

During World War II, it was sometimes hard to know who hated the Chinese Nationalist commander Chiang Kai-shek more: his sworn enemy, the Chinese Communist Party, and its leader Mao Zedong — or the Americans. It is a little known fact that at least twice during the long course of the war, senior officials of the United States considered assassinating Chiang, who was fighting the Japanese on the side of the Americans. During the Cairo Conference in November 1943, attended by President Franklin D. Roosevelt, British Prime Minister Winston Churchill, and Chiang, Roosevelt met privately with his senior commander in China, Maj. Gen. Joseph Stilwell. “Big boy,” Stilwell said when he got back to China’s wartime capital Chongqing, quoting Roosevelt to his chief of staff, Gen. Frank 'Pinky' Dorn, “if you can’t get along with Chiang and can’t replace him, get rid of him once and for all. You know what I mean. Put in someone you can manage”...

This American (and Chinese) vexation with Chiang persisted for decades — even after he fled to Taiwan — resulting in a widespread conventional wisdom that he was one of the great incompetents of history. Indeed, it would be pointless to deny his faults. Especially after the United States came into the war at the end of 1941, he frequently refused to go on the offensive against Japan, keeping several hundred thousand of his best troops in reserve to guard against the expansion of Mao’s party in the north. At Cairo, Roosevelt wondered aloud to his son Elliot “why Chiang’s troops aren’t fighting at all”...

And yet, the view of Chiang in the United States has softened in recent years — a trend marked by the 2009 book The Generalissimo, a major biography by the historian Jay Taylor, which gave Chiang more credit for his brave leadership under impossible circumstances than previous historians. The view of Chiang has also shifted on both mainland China and Taiwan, reflecting changing political circumstances in both places. For Beijing, which just held a splashy military parade on Sept. 3 to celebrate its wartime victory over Japan, there have been far fewer negative comments about Chiang, intransigent anti-Communist though he was. Conversely, on Taiwan, the one part of China that he was able to preserve from Maoist dictatorship, Chiang’s stature has steadily declined.

Why the shift? Especially in the United States, there’s the realization that getting rid of Chiang would in all likelihood have not produced a happy result. It is hard to imagine that it would have altered the tragically paradoxical outcome of World War II in Asia: The United States fought for four years to prevent a hostile power, Japan, from controlling China, only to see the country fall to a Communist dictatorship closely allied to the Soviet Union, an even more menacingly hostile power.

Furthermore, many Americans at the time subsequently underestimated both the magnitude of the task that Chiang faced as his country’s wartime leader and his achievements against extraordinary odds. Indeed, it is difficult to imagine any alternative Chinese figure doing much better.

Contrary to popular perception, for example, Chiang did fight: He mounted a brave, veritably suicidal, resistance to the initial full-scale Japanese invasion of 1937. According to Stilwell’s replacement, Gen. Albert C. Wedemeyer, the battle for Shanghai, in which China lost thousands of its best troops, was at the time the world’s bloodiest battle since Verdun in 1916. Japan’s military leaders had predicted that the war in China would be over quickly. It could have been — if Chiang surrendered and joined forces with the Japanese in a renewed effort to eradicate the Communists. But while that may have been tempting, Chiang never did. His defiance tied down a million Japanese troops who otherwise would have been available for battle against American forces. For the first four years of its eight-year war of resistance against Japan, until Pearl Harbor pushed the United States into the battle in December 1941, China fought alone.


It was this that so impressed Wedemeyer. While Stilwell saw the Chinese leader as “a grasping, bigoted, ungrateful little rattlesnake,” Wedemeyer was unrestrained in his admiration. Chiang’s call on China’s people to “sacrifice and fight to the bitter end” was, Wedemeyer believed, “more gallant and resolute than Churchill’s famous ‘blood, sweat and tears’ speech.” Given his situation, moreover, his military strategy of “endeavoring to dissipate Japanese strength and forcing the enemy to overextend his lines” made perfect sense, Wedemeyer felt, and so did his diversion of troops to prevent Communist expansion. Chiang understood — as most Americans, focused exclusively on the defeat of Japan, did not — that once the war ended there would be a fight to the finish between him and the Communists. Chiang maintained, to any Americans who would listen, that if successful the Communists would impose a totalitarian dictatorship allied with the Soviet Union. And Mao’s total victory in 1949 proved him right.

"You must all be aware that modern war is not a mere matter of military operations. It involves the whole strength and all the resources of the nation. Not only soldiers, but also all citizens without exception, take part."