The Physical Ecology, Communal Loyalties, and Geopolitics of Egypt 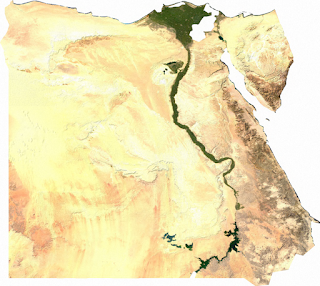 Although Egypt is a geographically large nation (about the size of Texas and New Mexico combined; twice the size of France; and three times the size of Germany), Egypt's physical geography is dominated by the desert. The western two-thirds of Egypt is formed by the appropriately named Western Desert, while the desert of Egypt's eastern third gives way to the rugged and semi-mountainous Red Sea Hills (see physical geography map at right). The physical geography of the Sinai Peninsula (about the size of West Virginia) in Egypt's northeast is a continuation of the rugged landscape of Egypt's eastern desert. The triangular shape of the Sinai forms two inlets to the Red Sea: the Gulf of Suez (where the Suez canal allows shipping from the Mediterranean and acts as an important geostrategic choke point) in the west and the Gulf of Aqaba in the east (which is also Israel's one outlet to the greater Red Sea).

Although Egypt is dominated by deserts, the heart of the nation is the Nile River which runs from the country's south to the north, passing through the fertile Nile Delta before emptying into the Mediterranean. The Nile is the life of Egypt. In fact, the vast majority of Egypt's population lives around the Nile; 98% of the population lives on 3% of Egypt's land. The Nile provides Egypt with a rich source of agricultural products along with hydro-power. Egypt's other national resources include coal, natural gas, crude oil, iron ore, and phosphates. Where crude oil and natural gas are found in the Western Desert and the Gulf of Suez, coal deposits were discovered at the northeastern portion of the Sinai peninsula.

Egypt's population of around 90 million is concentrated along the Nile River (see image at left for Egypt's population density).  Egypt's large population alone makes it the largest nation in north Africa and third largest on the African continent (behind only Nigeria at 173 million and Ethiopia at 94 million). Egypt is also the Islamic Mideast's most-populous nation and the sixth largest Muslim country overall. This is quite a feat considering Egypt's population in 1798 was a mere three million.

Ethnic Egyptians comprise around 91% of the total population, with the rest made up of small groups of Turks, Greeks, Bedouins, etc. Egypt also hosts about 1.5 million refugees from places like Iraq, Palestine, and Sudan. Various Arabic dialects form the dominant language of Egypt, although historically Greek, Italian, French and modern-day English have played an important role. Islam, particularly Sunni Islam, forms Egypt's primary religious identity. Shiites number between 1-2 million while over 15 million Egyptians are registered Sufis (the actual number of Egyptian Sufis is thought to be much higher). Salafis - who account for the vast number of Islamic jihadis - number about six million. Around 9% of Egypt consists of Coptic Christians. While 90% of these Christians identify as Oriental Orthodox, there are also Egyptian Catholics, Greek Orthodox, and even some Protestants.

Egypt borders Israel and the Gaza Strip to the northeast, Saudi Arabia to the east, Sudan in the south, and Libya to the west. Egypt's location makes it a gateway or bridge between the broader Mideast, and the African continent. Its Mediterranean coast and long history with its European neighbors to the northwest gives Egypt an important link to Europe. Where Sunni Islam connects Egypt to Muslim brethren throughout the region, the substantial numbers of Orthodox Christians undoubtedly draws Russian attention as Russia has played a historic role in protecting Christian minorities in the Middle East.

Egypt's recent political history has been one of turbulence since the military's coup d'état in the 1952 Revolution brought General Muhammad Naguib to power as the first President of the Republic of Egypt. Naguib, however, soon fell from power and was replaced by President Gamal Abdel Nasser. Nassar's nationalization of the Suez Canal led to an attack launched by France, Britain, and Israel seeking to reclaim the canal for western control. Subsequent pressure from the US and USSR led to the withdrawal and humiliation of the invaders and the strengthening of Nassar. He sought to spread Pan-Arabism, doing so by creating a short-lived confederation of Egypt, Syria, and North Yemen under the United Arab States. While this attempt failed, Egypt did provide North Yemen with 70,000 troops in its civil war with the South. Nassar was also in power during another conflict with Israel - 1967's Six-Day War - which ended in a humiliating defeat of Egypt.

The death of Nassar in 1970 brought Anwar Sadat to power. Until Sadat, Egypt had a Soviet orientation - but Sadat chose to realign Egypt with America. Sadat also launched a surprise attack on Israel in the Yom Kippur War of 1973, and later used the results of the war to reclaim the Sinai Peninsula which it had lost to Israel in 1967. Sadat, however, was assassinated by an Islamic extremist in 1981. The long rule of Hosni Mubarak lasted from 1981 until his removal from power in 2011. The 2011 Revolution, like the Revolution of 1952, relied on the Egyptian military's involvement. The rapid fall of the Muslim Brotherhood and President Morsi following the Revolution happened at the hands of the military. Indeed, today's President of Egypt, Abdel Fattah el-Sisi, was the head of Egypt's military before being elected.

For more information on Egypt, visit its page on the CIA World Factbook.


Stratfor on Egypt's Geographic Challenge: Stratfor - short for Strategic Forecasting, Inc. - is a private global intelligence company that offers geopolitical insight into the interplay of nations. Stratfor has developed an excellent series of short (~2-4 minute) videos which provide the viewer with a specific nation, along with its basic history, geography, culture, and geopolitical allies and adversaries. In the following video, they present the geographic challenges facing Egypt.