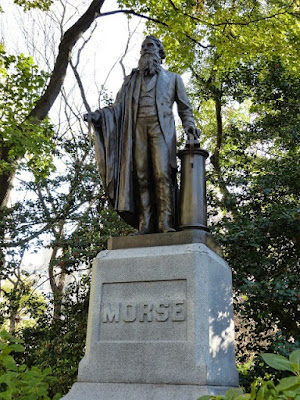 Watch the opening of this "60 Minutes" story on the influence of Paris. It turns out that inventor Samuel Morse (d. 1872) was also a first-class artist.


From Richard Brookhiser's review in the 'NY Times' of a biography of Morse:


I learned Morse code when I was a Boy Scout. Even then it was a musty skill; Western Union had sent its last Morse telegram in 1960. Yet the invention of the telegraph more than a century earlier was an epochal event, our first experience of the simultaneity of existence that now engulfs us in 24/7 media and the Internet. In Lightning Man, the historian Kenneth Silverman lays out with great thoroughness the troubled busy life of Samuel F. B. Morse, the telegraph's inventor.

Born in 1791, Samuel Finley Breese Morse was, by the standards of his minister father, an easily distracted child. But he early showed a talent for drawing and an interest in science. He tried a career in art first -- bravely, considering the cultural state of America. American painters of an older generation, Benjamin West and John Singleton Copley, had had to move abroad to prosper. Morse went to England, Italy and France to learn his craft, then founded the National Academy of Design in New York to raise the visibility and prestige of artists at home. Morse's history paintings, on which he set his heart, seem stiff and pompous; yet the portraits Silverman reproduces, though Morse disdained them as moneymakers, are keen and quirky. In the 1840's Morse continued his portraiture in the new medium of photography; one of his pupils was Mathew Brady.

Morse's lifelong propensity to tinker carried him over the threshold of greatness. Benjamin Franklin had shown that electricity could be conducted by wire. Morse realized that if the current could be controlled and recorded, electricity could be used for communication. Morse and his age, Silverman writes, shared a belief in ''the Lone Inventor, creating ex nihilo from his lofty imagination.'' Morse in fact had a great deal of help in making his insight bear fruit. Leonard Gale, a chemistry professor at New York University, taught him crucial facts about batteries and electromagnets, while Alfred Vail, a young machinist, refined and improved the contraptions that Morse built. Other men, like Charles Wheatstone, an Englishman whose inventions included the concertina and the rheostat, were working on their own versions of the telegraph. But Morse was pre-eminent as a catalyst and synthesizer. Silverman concludes: ''Morse created a telegraph system that against many competitors repeatedly proved itself to be the cheapest, the most rugged, the most reliable and the simplest to operate. By perseverance that would not be denied he made it a commercial reality.''

The first demonstration of long-range telegraphy occurred in May 1844. Morse in Washington and Vail in Baltimore sent each other an awe-struck message from Numbers 23:23: ''What hath God wrought!'' Days later, God wrought the news of James K. Polk's winning the Democratic presidential nomination at the party's convention in Baltimore. Soon the line was carrying long-range chess games, Mexican War dispatches and election returns. (With respect to the last, Morse cautioned his operator ''to give only official results, not mere rumors, and in announcing them to leave no impression of political partisanship'' -- still good advice.) Morse lived to see telegraph wires spanning America, Europe and Asia, and crossing the Atlantic by underwater cable. The new technology gave rise to imperial companies, like Western Union and The Associated Press, and large fortunes, including his own. When he died in 1872, telegraph operators draped their instruments in black.

Alongside his successive careers as a painter and an inventor, Morse pursued a deep and unfortunate interest in politics. Roman Catholic Europe had struck Morse the art student as a sinkhole of oppression and squalor; in Naples, he ''may well have written'' what Silverman calls ''the first description in American literature'' of pizza: ''a piece of bread that had been taken reeking out of the sewer.'' From the 1830's to the 1850's Morse was a nativist, opposing immigration and Jesuit plots, and running unsuccessfully for mayor of New York and for Congress. During the Civil War, he became a Northern defender of slavery, attacking the Lincoln administration as ''imbecile & bloodthirsty.''

Morse's private life offered little relief from his public anxieties. He was easily depressed, by turns credulous and suspicious, and subject to psychosomatic illnesses. His first wife died young; his second was deaf. He was devoted to both, but to his children he was an erratic and distant figure. A trail of suicides winds through his family.

Not all Morse's problems were his own doing. A fair proportion of his business associates turned out to be scoundrels or mischief-makers; others turned against him through sheer weariness with his difficult temperament. Morse's invention was engulfed in squabbles over intellectual paternity; 15 lawsuits were spawned by the telegraph, one of them going all the way to the Supreme Court. Beating off these challenges involved him in endless polemics and legal maneuvering. Amos Kendall, a crony of Andrew Jackson, became Morse's business manager and served him loyally and well. But he could not keep his client out of the arena.

The most important aspect of Lightning Man is its relevance to the way we live now. Before the telegraph, as Silverman points out, communication was a function of transportation. Messages traveled only as fast as ships, horses or trains could carry the bearers. After the telegraph, communication seemed magical, virtually instantaneous (hence the ''lightning'' of the title). What did people make of the change? Morse, and many of his peers, believed in what Silverman calls an ''ideology of redemption through communication.'' They thought men and nations would be brought closer together, and war would cease -- this despite the fact that the telegraph quickly became a tool of war reporting, and war making. Not everyone was hopeful; Silverman quotes Thoreau, who wondered whether all the people sending one another telegrams would have anything ''important to communicate.''

These are the polar reactions to every step in the march of progress: everything will change, or nothing will. The truth, for Morse and for us, is more complicated. Human nature remains the same, but our options for good and for ill increase. Spammers offer breast and penis enlargements; Iranian bloggers tell the world of their plight. The bombardment of drivel and passion leaves us both excited and fatigued. Silverman quotes an unnamed 19th-century journalist, writing of the telegraph, who hit our predicament exactly: ''This extraordinary discovery leaves . . . no elsewhere -- it is all here.''


An anecdote from the book can be found here: Mr. Morse providing news flashes from the 1844 Democratic national convention.

UPDATE -- Samuel's father, Jedidiah, was famous in his own right: as Calvinist preacher, stalwart supporter of the Federalist Party, and "father of American geography"! He married the daughter of a former Princeton University president.

Reverend Morse helped found the Park Street Church in Boston (1809) when all the Congregational churches of that city, except the Old South Church, had abandoned the orthodox faith.

[Truly, one of the most puzzling events in the early history of our country -- several decades after the 'First Great Awakening' -- was the apostasy of thousands of Protestants who succumbed to the notion that the Blessed Trinity was irrelevant.
It would be fascinating to know what went through the mind of Jean-Louis Cheverus (the first Catholic bishop of Boston) and his priests as they witnessed the spectacle.
Holy men such as Jonathan Edwards and George Whitefield had preached their hearts out, but much of the fruit withered on Unitarian vines.]