[My original plan was to feature the George Washington biography by Ron Chernow, but after browsing awhile it seemed less gripping than his tale of Alexander Hamilton... so I opted for a favorite from a few years back: The Indispensable Man by the late James Thomas Flexner. His life of Washington is now available in an illustrated edition by Sterling Signature.] 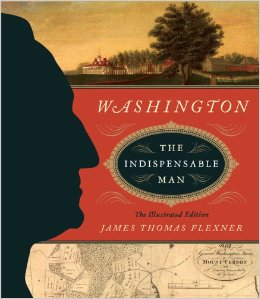 The prime song of thanksgiving that Americans can offer to God is that we should be blessed with such a patriarch as Mr. Washington!

His character was such, that it calls to mind a description from Holy Scripture:
"Now the man Moses was very humble, more than all men who were on the face of the earth."

Napoleon and Stalin and Mao are cheered in many quarters as true nationalists. If we're going to cut so much slack for butchers and megalomaniacs, we'd best be honest and call our Founding Father a demigod. 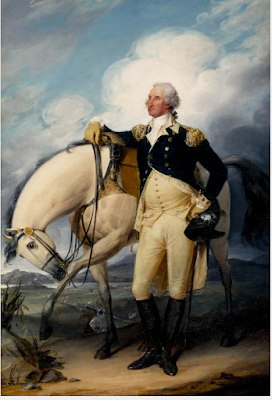 George Washington's election by Congress as chief commander had been unanimous (June 16, 1775) -- "Washington was the most celebrated veteran of the French and Indian War who was still young enough to lead a new contest." Then the chore began of building up the Continental army from nothing.

A week later, "Washington's party set out to join his army in Cambridge, Massachusetts." They passed through New York City; while there, he "heard that a great battle had been fought outside Boston for the control of Bunker Hill." The British army had been victorious, but at the cost of many casualties.

"Arriving in Cambridge, he quickly discovered that no one gave or obeyed any orders. The militiamen, having elected their officers, expected due subservience to the sovereign voters."

Washington saw that his first duty was to establish a good officer corps, and began by discharging or prosecuting assorted incompetents. He soon learned the bad news that he only had 12,000 healthy soldiers -- and a mere 36 barrels of gunpowder (less than nine rounds a man). "He cautiously kept the fact that his army was defenseless from all but two or three key men."

George Washington had an innate martial dignity ("Not a king in Europe but would look like a valet de chambre by his side.")


"The Continental Congress having now taken all the Troops of the several Colonies, which have been raised, or which may be hereafter raised, for the support and defence of the Liberties of America; into their Pay and Service: They are now the Troops of the United Provinces of North America; and it is hoped that all Distinctions of Colonies will be laid aside; so that one and the same spirit may animate the whole, and the only contest be, who shall render, on this great and trying occasion, the most essential Service to the great and common cause in which we are all engaged."

Looking back at the beginning of the Revolutionary War, he summed up: "Not then organized as a nation... we had no preparation. Money, the nerve of war, was wanting. The sword was to be forged on the anvil of necessity."

George Washington wore to his inauguration a great rarity: a suit made from cloth woven in the United States!

President Washington's address that day was delivered with trembling voice and hands. The religious passages took up almost a third of the speech. He expressed "my fervent supplication to that Almighty Being who rules over the universe, who presides in the Councils of Nations, and whose providential aids can supply every human defect."

Here is the closing paragraph:


"Having thus imported to you my sentiments, as they have been awakened by the occasion which brings us together, I shall take my present leave; but not without resorting once more to the benign parent of the human race, in humble supplication that since he has been pleased to favour the American people, with opportunities for deliberating in perfect tranquility, and dispositions for deciding with unparellelled unanimity on a form of Government, for the security of their Union, and the advancement of their happiness; so his divine blessing may be equally conspicuous in the enlarged views, the temperate consultations, and the wise measures on which the success of this Government must depend."


Mr. Flexner writes: "The famous orator, Fisher Ames, was amazed by the effect of Washington's simple delivery... The whole audience, even Vice President John Adams, who was passionately jealous of Washington, was greatly moved." 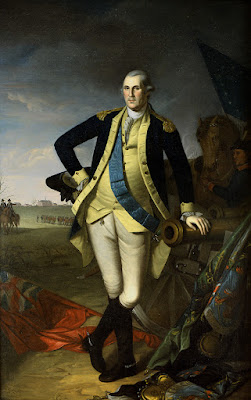 Here is a 15-minute segment of an interview Mr. Flexner gave to Bill Moyers.

King George III asked his American painter, Benjamin West, what George Washington would do after winning independence. West replied, “They say he will return to his farm.”

“If he does that,” the incredulous monarch said, “he will be the greatest man in the world.”

UPDATE: Take a look at this blog on presidential biographies.