Lee Kuan Yew, the founding father of the nation city-state of Singapore, died at 93 on March 23, 2015. His wife of sixty years passed away a few years before him. His city-state still lives. 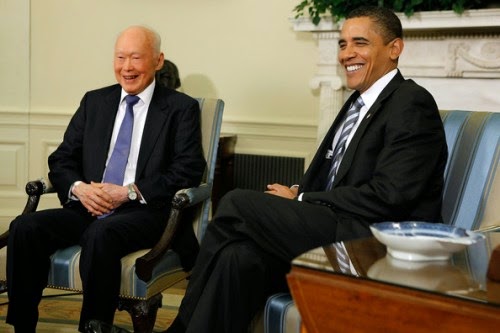 He built his nation on: universal male military service; English as the official integrative language; government-built housing turned over for private home ownership; a highly paid merit-based government class; and a civic culture actively opposing racial, religious, and linguistic enclaves. Lee was an ethnic Chinese who made English the official language of the city to bolster the city's international role in trade and learning. He was considered a model teacher of governance to many of the Chinese reformers, and had active relations with them as well as US leaders and academics throughout the last forty years. He built a secularized civic culture perched in the midst of the two largest Muslim countries in Southeast Asia.

British Prime Minister Tony Blair called him the smartest man he had ever met; and Henry Kissinger said "of the many world leaders I have been privileged to meet, none have taught me more than Lee Kuan Yew." Chinese leader Xi Jinping spoke for the rest of us: "[He is] our senior who has our respect."

Two scholars and practitioners of high-level American foreign policy (one Democrat and one Republican) have combined selections from hundreds of his speeches and interviews -- along with some of their own discussions with the island's founding father -- to publish his responses to a series of questions they imagine a new American president might want to ask about China, Asia, the United States, and the world.

The authors begin each of the ten chapters with a series of questions, and then record direct quotation "answers" from Lee through the years. This asynchronous interview technique turns out to be an ingenious way to bring a reader into contact with a half century of Mr. Lee's "key insights and central arguments" applied to today's questions. The authors wrote the 160 pages of text so it could be "scanned quickly" hoping that readers would be "compelled by Lee's words to pause and think about his assertions that they find surprising, even disturbing but invariably illuminating."

[Go here for more on the book, including a half-hour discussion by the authors].

ON CHINA IN ASIA

"Of course they plan on being the number one power in Asia. Why not? They have transformed a poor society into an economic miracle. Theirs is a culture of 4000 years with 1.3 billion people, many of great talent -- a huge and very talented pool to draw from. How could they not aspire to be number one in Asia and in time, the world? ... The Chinese people have raised their expectations and aspirations. Every Chinese wants a a strong and rich China. This reawakened sense of destiny is an overpowering force. Unlike other emergent countries China wants to be China and accepted as such, not an honorary member of the West. At the core of their mindset is the world before colonization... China means 'Middle Kingdom,' recalling a world where they were dominant and related to other states as supplicants and vassals."

"China is following an approach consistent with the ideas of the Chinese television series, 'The Rise of Great Powers,' produced by the the Party to shape discussion among the elites. The mistake of Germany and Japan was their effort to challenge the existing order. The Chinese are not stupid; they have avoided this mistake. Overall GDP, not GDP per person, is what matters in terms of power. The Chinese have calculated they need 30, 40, maybe 50 years of peace and quiet to catch up and change the Communist system to the market system. They must avoid the mistakes of Germany and Japan. Their competition for power, influence, and resources led in the last century to two terrible wars. The Russian mistake was to put too much into military expenditure and so little into civilian technology. So, their economy collapsed. The Chinese leadership has learnt that if you compete with American armaments, you will lose. You will bankrupt yourself. So avoid it , keep your head down and smile... for 40 or 50 years."

"He has had a tougher life than Hu Jintao (Chinese leader 2002-2012). He is reserved, not in the sense that he won't talk with you but in the sense that he will not betray his likes and dislikes. He has iron in his soul... I would put him in the Nelson Mandela class of persons -- a person with enormous emotional stability who does not allow his personal misfortunes or sufferings to affect his judgment. In other words he is impressive."

THE US AND EUROPE

"If you follow the ideological direction of Europe, you are done for."

"In an emergent society, authority has got to be exercised. And when authority is not backed by position, prestige, or usage then it has to defend actively against challenge. The day Mikhail Gorbachev said to the masses in Moscow: do not be afraid of the KGB, I took a deep breath. The man is a real genius... he sits on top of a terror machine and he says: do not be afraid. Until I met him , and I found him completely bewildered by what was happening around him. He had jumped into the deep end of the pool without learning how to swim. I understood Deng Xiaoping when he said: if 200,000 students have to be shot, shoot them because the alternative is China in chaos for another 100 years... Deng understood, and he released it stage by stage. Without Deng, China would have imploded. (Deng was China's paramount leader from 1978-1992). In a settled and established society, law appears to be a precursor of order... But the hard realities of keeping the peace between person and person, and between authority and individual, can be more accurately understood if the phrase were inverted to 'order and law' -- for without order, the operation of law is impossible."

"The British Empire was supposed to last another thousand years in Southeast Asia, but collapsed when the Japanese army came in 1942. I never thought they could conquer Singapore and push the British out. They did and brutalized us, including me... I learned about power long before Mao Zedong wrote that power came from the barrel of the gun. The Japanese demonstrated this; the British did not. The Japanese invasion of Singapore was the single biggest political education of my life because, for three and a half years, I saw how power and politics and government went together; and I understood how people trapped in a power situation responded because they had to live."

"The ideas about individual supremacy... when carried to excess, have not worked. They have made it difficult to keep American society cohesive. Asia can see it is not working. Those who want a wholesome society where young girls and old ladies can walk the streets at night, where the young are not preyed upon by drug peddlers, will not follow the American model... the top 3 to 5 percent of a society can handle this free-for-all. If you do this with the whole mass, you will have a mess. To have day-to-day images of violence and raw sex on the picture tube, the whole society exposed to it -- it will ruin the whole community."

"The big divide is no longer democracies and communism. Now it is between Muslim terrorists and the US and Israel and their supporters. A secondary battle is between militant Islam and non-militant modernist Islam. The Israeli-Palestinian conflict is not the cause of Islamic terrorism. When Pan-Arabism failed to unite the Muslim world in the 1950's and 1960's, Islamic fervor became an alternative unifying force... The nature of Islam in Southeast Asia has been changing over the last 30 years. First and foremost after the price of oil quadrupled in 1973, Saudi Arabia financed the missionary movement paying for schools and mosques; and paying preachers to teach their austere version of Wahhabist Islam. Next, the overthrow of the Shah of Iran in 1979 had a profound effect on Muslim beliefs in Islam's power. Finally, the participation of large numbers of Southeast Asian Muslims in the jihad in Afghanistan in the 1980's and 1990's has radicalized significant numbers of [them]. When we ask our Muslims, why have you become so strict in your religious practices, they say 'we are better educated and so understand better what is to be observed.' But the bigger factor is the peer pressure from the heart of the Muslim world... as a result of the Saudi funding of mosques, madrassas, and religious teachers, whole populations are geared up. Over the last 30 years with the oil crisis and petrodollars becoming a major factor in the Muslim world, the extremists have been proselytizing, building mosques, religious schools where they teach Wahhabism... sending out preachers, having conferences, networking. Slowly they have convinced Southeast Asian Muslims, and indeed Muslims throughout the world, that the gold standard is Saudi Arabia, that is the real good Muslim."

HOW TO DEFEAT MUSLIM EXTREMISM

"The United States must be more multilateral to rally Europe, Russia, China, and India as well as many moderate Muslims. It is not poverty or deprivation but something more fundamental -- a resurgence of Arab and Muslim pride and a belief that their time has come. The objective is to persuade the moderate Muslims that they are not going to lose, that they have the weight and resources of the world behind them. Then, they will go into the mosques and madrassas and switch off the radicals. Americans... must use force. But force will only deal with the tip of the problem. In killing the terrorists, you will only kill the worker bees. The queen bees are the preachers, who teach a deviant form of Islam in the schools and Islamic centers, who capture and twist the minds of the young..."

UPDATE: The Fall of Singapore occurred two months after Pearl Harbor. The loss by the British of the Gibraltar of the East caused Churchill to call the week-long battle "the worst disaster in British military history."

A couple photos from the Japanese occupation: 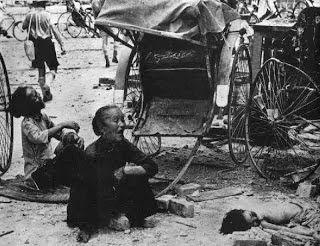 Here is a short video overview of Singapore and its long-time patriarch.

A columnist in the Philippines pays tribute (and mentions Mr. Lee's two-part autobiography).

The Discovery Channel did an excellent 5-part history of Singapore.

Some memories of his late friend by Henry Kissinger.

And an interview conducted a decade ago by Fareed Zakaria.

"In the East the main object is to have a well-ordered society
so that everybody can have maximum enjoyment of his freedoms.
This freedom can only exist in an ordered state
and not in a natural state of contention and anarchy."
(Lee Kuan Yew)