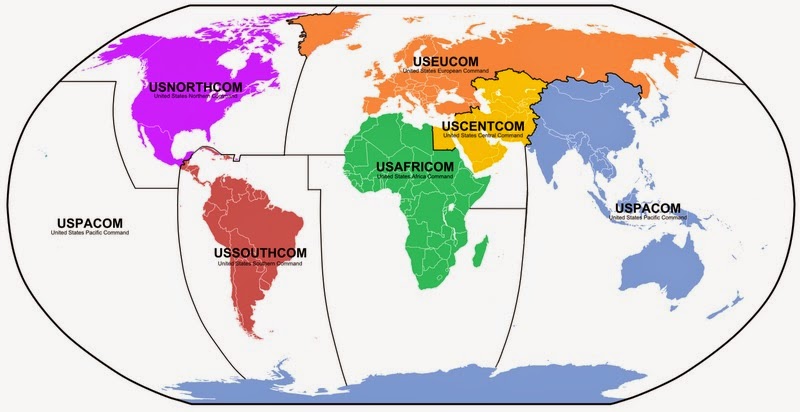 The map above (click to enlarge) explains how the United States military has arranged structures of command and authority for engaging in military conflict throughout the world. Historically forged out of the crucible of the Second World War, each Command is led by a four-star General or Admiral who is given command over the forces operating within his "Area of Responsibility" (AOR). The United States Central Command (USCENTCOM), for example, is currently headed by General Lloyd Austin, who effectively commands military units within the Mideast with the exception of Israel (which falls under the boundaries of the United States European Command).

The six regional or geographical Commands, along with some of their primary responsibilities, include:

In future Map on Monday posts, we will return to each of the six geographic Unified Combatant Commands for further examination and analysis.


President-elect Donald Trump selected two former combatant commanders (and Marine Corps generals) to act as his secretaries of defense and homeland security. General James "Mad Dog" Mattis, nominated for defense, was the commander of the Central Command from 2010-2013. Mattis is also known as the "warrior monk" for his dedication to military service and study, and having no family. Great Mattis quotes and stories abound. General John Kelly, nominated for homeland security, commanded the Southern Command from 2012-2016. His former position undoubtedly gave him great insight into America's south and central American allies, the region's drug smuggling problems, and the need to maintain strong American border security. A general like Mattis, Kelly has also experienced the sacrifice of family for military service: his son, First Lieutenant Robert Kelly, was killed in Afghanistan in 2010.

In addition to Generals Mattis and Kelly, President Trump appointed General H.R. McMaster as his National Security Advisor. McMaster, though not a former combatant commander, was one of America's most capable generals in the Iraq war while also spending time in Afghanistan. His refusal to use the phrase "radical Islamic terrorism" because he sees the terrorists as "un-Islamic" is helpful in clarifying friend and foe in the current religious war. We hope President Trump adopts a similar view in his approach to Islam and terrorism.