Realism in foreign policy has many definitions with modifications (neo, classical, structural). It is identified with thinkers such as Hans Morgenthau, Kenneth Waltz, Robert Jervis, Stephen Walt and John Mearsheimer.


1) The international order is anarchic -- there is no ultimate authority governing nations in perpetual conflict
2) The principal actors are nation-states (not class conflict as in Marxism)
3) Nation states are rational but self-interested, seeking to maximize power in order to insure survival
4) Mankind is inherently selfish and competitive

Consequences of this approach lead to descriptions of international relations in terms of polarity, hegemony, and balance of power.


A good discussion of realism by Columbia professor Richard Betts.

A review of the principles of realism by Professor John Mearsheimer applied to China. 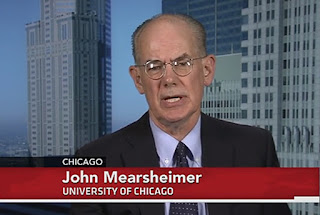 
Mearsheimer calls himself an "offensive realist" and explains why the principles of realism lead nations to seek regional hegemony. He says it is no longer possible to be a world hegemon (dominant power). He argues that while the US cannot be the world hegemon, we should work to insure that no other country becomes a dominant regional power. He says that if we allow a regional power to develop, then that power could become a relative threat to our region as a "peer competitor." He is a very clear and engaging speaker. This kind of thinking, however, leads to an American foreign policy aimed at encircling and weakening three nations which could become dominant regional powers: China, Russia, and Iran. This thinking appeared to be the dominant paradigm of the Hillary Clinton, Jeb Bush, Rubio, Cruz, and Christie campaigns in the 2016 presidential election.

[ed: The Christian Realism which we advocate at AOA has a very different set of core principles.]

A body of thought in dialogue with the realists -- but stressing geopolitics, history, and culture -- is advocated by the Foreign Policy Research Institute. Here's a terrific overview by Ron Granieri on What is Geopolitics and Why does it Matter.