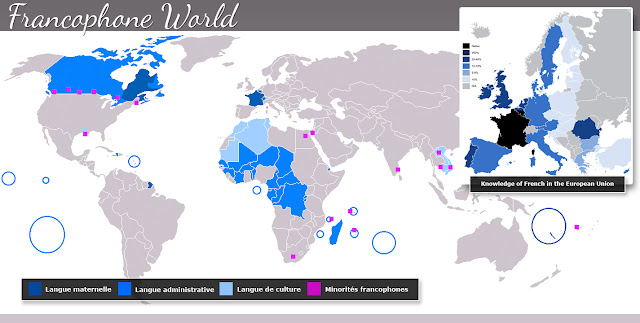 The map above (click here for a larger version) depicts the French-speaking nations of the world. While French is the mother tongue of 66 million in France, 11 million more throughout Europe, 6.8 million Canadians, and another 250,000 in South America's French Guiana (an overseas department of France), another 140 million people speak French as a second language. French is an official language in 29 nations. The areas where French has dominated roughly corresponds to French imperial domains across the world: French Indochina (what is today Laos, Cambodia, and Vietnam), parts of the Caribbean (e.g. Haiti), and large parts of Africa. Although today more people speak some form of Hindi or Chinese, the historic spread of French makes the language an important worldwide medium of communication.

July 27, 2015 Update: With President Obama visiting the Horn of Africa, consider reading our recent post on the region.
Posted by Andrew Lynch at 6:00 AM