One of President Lincoln's "political generals"


Benjamin Franklin Butler (1818-1893) was "the archtype of the fixer, the influence man... There was always something soiled about the man, but he remained uncanny and untouchable."

The historian Bruce Catton goes on to say of him and other politicians who became Civil War generals: "The army had to carry these costly misfits on its shoulders."

A Massachusetts congressman and governor, Benjamin Butler showed an easy agility in jumping back and forth from the Democratic party to the Republicans. Late in his career, he ran for president as the nominee of the Greenback party (a farmer/labor coalition). 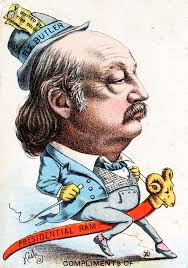 Bruce Catton gives a lucid explanation of why General Butler lasted as long as he did:


"Somewhere, in the tangled mesh of politics that lay between Washington and the fighting fronts, Butler possessed influence that even the commander of the armies could not break. Grant tried to have him removed, and failed...

"Butler held one prodigious trump card which Grant could not see. This was a presidential election year, and just when Grant was trying to rid himself of this incompetent general the leaders of the Republican party, very much against their will, were in the act of renominating President Lincoln for a second term. It was not time to rock the boat, and Butler was just the man who could rock it to the point of capsizing it.

"From the beginning, Lincoln's real problem had been political. He had a war to win and he had to find generals who could win it, but above everything else he had to control the war -- not merely the fighting of it, but the currents which would finally determine what it meant and what would come of it all...

"There were strong men in the North who wanted revenge.. and the South was not part of the country as they saw it. Lincoln stood in their way, and they would put one of their own kind in his place if they could. Standing with them were the men whose minds were laudably high but deplorably narrow: the abolitionists...

"What had kept them off the warpath so far was partly the fact that Lincoln did seem to have most of the people with him... To date, only nobodies had offered themselves against him, men like John Charles Fremont, who was heading a rickety third-party slate. But Butler was a somebody. Soldiers might know him as a cipher, but with abolitionists and bitter-enders he was a mighty hero. He had boundless ambition and a total lack of scruples, and he saw himself as a  presidential possibility. If the army suddenly dropped him he would land in the arms of the political extremists...

"So the truth of the matter probably is that in the infinite, complicated economy of the Civil War it was better to keep Ben Butler a major general, even though soldiers were needlessly killed because of it, than it was to inject him back into the political whirlpool... The Administration had to ask, in effect: Where will this man do the least harm -- as a general, or as a politician out of control?"

Other political generals of the Union Army included John A. McClernand, a longtime Illinois acquaintance of the Lincolns (he married a close friend of Mary Todd's); Franz Sigel, who was exiled from Europe after the failure of the 1848 revolutions -- he helped solidify German immigrant support for the Union cause; and Nathaniel Banks, who had served a term as Speaker of the U.S. House of Representatives.
In a less corrupt world, of course, President Lincoln would not have had to play ball with such men (he had enough headaches trying to keep his professional generals in line).


An anecdote from Benjamin Butler's days as military governor of New Orleans, where the residents called him Spoons ("they believed that, in addition to committing an illegal hanging and insulting Southern womanhood, he had personally stolen silver spoons with his own hands"):


Butler censored the city’s newspapers and arrested people and confiscated their property if they showed support for the rebellion. William J. Seymour, editor of The Commercial Bulletin, was one who felt Butler’s heavy hand. Seymour and several other editors met with the general to try to persuade him to rescind the censorship order on the grounds that it violated their constitutional right of free speech (conveniently ignoring the fact that Louisiana had rebelled against the Constitution).

As the discussion became heated, Seymour asked Butler what would happen if he ignored the order and printed whatever he wanted to in his own newspaper. Seymour claimed Butler "roared like a mad bull," pounded his fist on the desk, and snarled, "I am the military governor of this state — the supreme power — you cannot disregard my order, Sir. By God, he that sins against me, sins against the Holy Ghost." 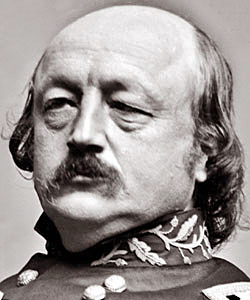 UPDATE: For many countries abroad, the Civil War was about republicanism and monarchy. What was the mood in England as American brothers turned their guns on each other? The historian James McPherson offers this appraisal of how the Brits viewed the conflict:


They focused on symbolic issues early in the war. For example, Benjamin Butler's famous "woman order" in New Orleans, in which he said that occupying Union soldiers who were being insulted and harassed by Southern women should treat them as ordinary women of the street plying their avocation. And the British thought this was an outrage. Butler also hanged a man who had run up and torn down the American flag over the courthouse in New Orleans, and the British thought that was barbarous. These were the two issues that aroused a lot of very strong anti-American and pro-Southern sentiment in Britain in 1862...

Punch, the British humor magazine with a very satirical twist to it, was very anti-Lincoln through much of the war. Their cartoons of Lincoln portrayed him as a kind of malevolent, backwards buffoon. Toward the end of the war, they began changing their tune.